Oriental Rugs: A Guide and History

Oriental rugs is a generic term that now refers to all handmade rugs woven (and hand-knotted pile rugs) made in what is called the Rug Belt: the area that stretches from Morocco in the west, across North Africa, though the Middle or Near East and Central Asia to Northern India. And Northern China, Mongolia, and Tibet are also known for their Oriental rugs, while Iran (Persia) and Turkey (Anatolia) were historically the most central and important regions involved in handmade rug production and trade.

The Oriental rug was an important commodity traded on and found and woven in locations along the Silk Route (or Silk Road) that stretched from the Mediterranean Sea through Central Asia to northern China. This route was the chief route for trade between the East and West from 200 BCE until the eighteenth century when sea routes were established.

All Oriental handmade rugs have a pile foundation or knotted pile that is made up of either cut ends or loops of extra yarn with varying pile heights. The higher the measurement from the foundation to the pile end, the thicker and heavier the rug becomes. Rugs lacking a pile, foundation are referred to as flatweaves or kilims.

Often one comes across the term Oriental carpet, and in English usage the term carpet simply indicates a larger size rug that typically exceeds ten feet in length. Another common term relating to rug size or rather shape is a runner, and an Oriental runner rug is simply a longer than usual vertical length rug which is used in hallways. Other common Oriental rug types are prayer rugs, which are typically designed for one person and include a mihrab design element that symbolizes the prayer niche in the wall of a mosque.  The direction of Mecca is represented by an arch (or triangle or dome) at one end of the rug. Finally, a pictorial Oriental rug is one that features a representation of a person or natural or historical scene, and such rugs are often hung on walls, like paintings.

A handmade Oriental rug is woven in a loom made with yarns called warp yarns that run parallel to one another vertically along the length of the loom. These vertical warp yarns are tied together by hand, a knot is made with a short piece of yarn between two adjacent warp yarns. After making a row of such knots, one or more horizontal or weft yarns are passed through these vertical warp strands. To facilitate this process, the horizontal weft yarns are pulled over a gauge rod to make loops of yarn that face the weaver, and this rod is either removed to leave the loops closed (resulting in a loop pile), or the loops are cut over the rod (resulting in a cut pile). Knots are compressed and firmly beaten and thus secured into place with a tool called a comb.

The higher the knot count in an Oriental rug, the longer it takes to weave, and the higher its value and cost, and greater amount of intricate detail and curvilinear design motifs and patterns can be created. The term knot density is also used to describe a handmade Oriental rug; it indicates the number of knots per square inch, abbreviated as kpsi, which can range from 40 to over 1,000, though a range from 200 to 300 is common. Strictly functional rugs have a low knot count, as do rugs identified as tribal, that is, made in a village with modest means, while decorative rugs will have much higher knot counts.

Handmade Oriental rugs are usually made of wool and wool with silk; other materials, such as camel and goat hair, are rarely used. Cotton is also used in the rug pile. Wool is such a common material in rugs because it is has a solid, long fiber that is very fine, yet strong, and it possesses a natural color ranging from white, to yellow, gray, brown and black, which can be used in the rug design. Kurk (or kork) wool is very fine and high quality wool taken or shorn from the underside chest and neck area of lambs (young sheep).

The first handmade Oriental rug that dates back to the third century BCE was discovered in 1949 in the Altai mountains in Siberia in a burial mound (kurgan) of Scythian nomads whose culture is identified at this time and region as Pazyryk, so the woolen, knotted pile rug found here is called the Pazyryk carpet. It measures about six by six feet with a knot count estimated at 277 symmetric knots per square inch. It already shows what became very common elements of handmade Oriental rug design: a central field surrounded by a main border. Within the field there is a repeating allover geometrical design inside rows of squares, and inside the main border a repeating image of horse riders shown in profile. Scholars have not been able to determine the region and culture of origin of this rug, but its motifs recall architectural motifs found in Persepolis, the ancient capital of the Achaemenid Empire in 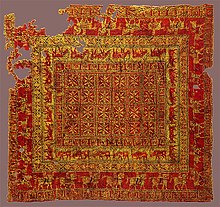 Oriental handmade rugs were likely already being woven in the third century BCE, but only fragments of such rugs have been discovered along sites on the ancient Silk Road trade route from Beijing and Xi’an, through Central Asia, Samarkand and Khotan, to Alexandria, Antioch and Byzantium. For example, in northwest China in the Taklamakan desert in the Tarim Basin region at two archeological sites Loulan and Karadong, silk, wool and cotton rug fragments date to around the same time as the Pazyryk carpet.

In 400 BCE what is likely an Oriental handmade rug attracts the attention of the ancient Greek writer Xenophon, whose reference to such a rug alludes its beauty and high value that elicit a striking and memorable impression.

Oriental handmade rugs have traditionally relied on a similar composition of decorative design elements which are classified as curvilinear or geometric. Rugs may be directional and viewed from a certain direction, such as a pictorial or prayer rug, and divided into a central design area with a border around it. Within the central design area or field, there are filler motifs, most notably one or several medallions, or a symbol, such as a vase or a tree of life. An allover repeating pattern of stylized flowers or geometrical forms is also a common rug design.

Many of the historically most magnificent and valuable Oriental handmade rugs are on display in museums throughout the world, which attests to the universal appeal and respect such rugs have earned as masterpieces of textile art.