Handmade wool rugs have become synonymous with Persian rugs, because during the reign of Abbas I, (1587–1629) also known as the Great, the most impressive and spectacular handmade rugs ever seen until that time were woven. 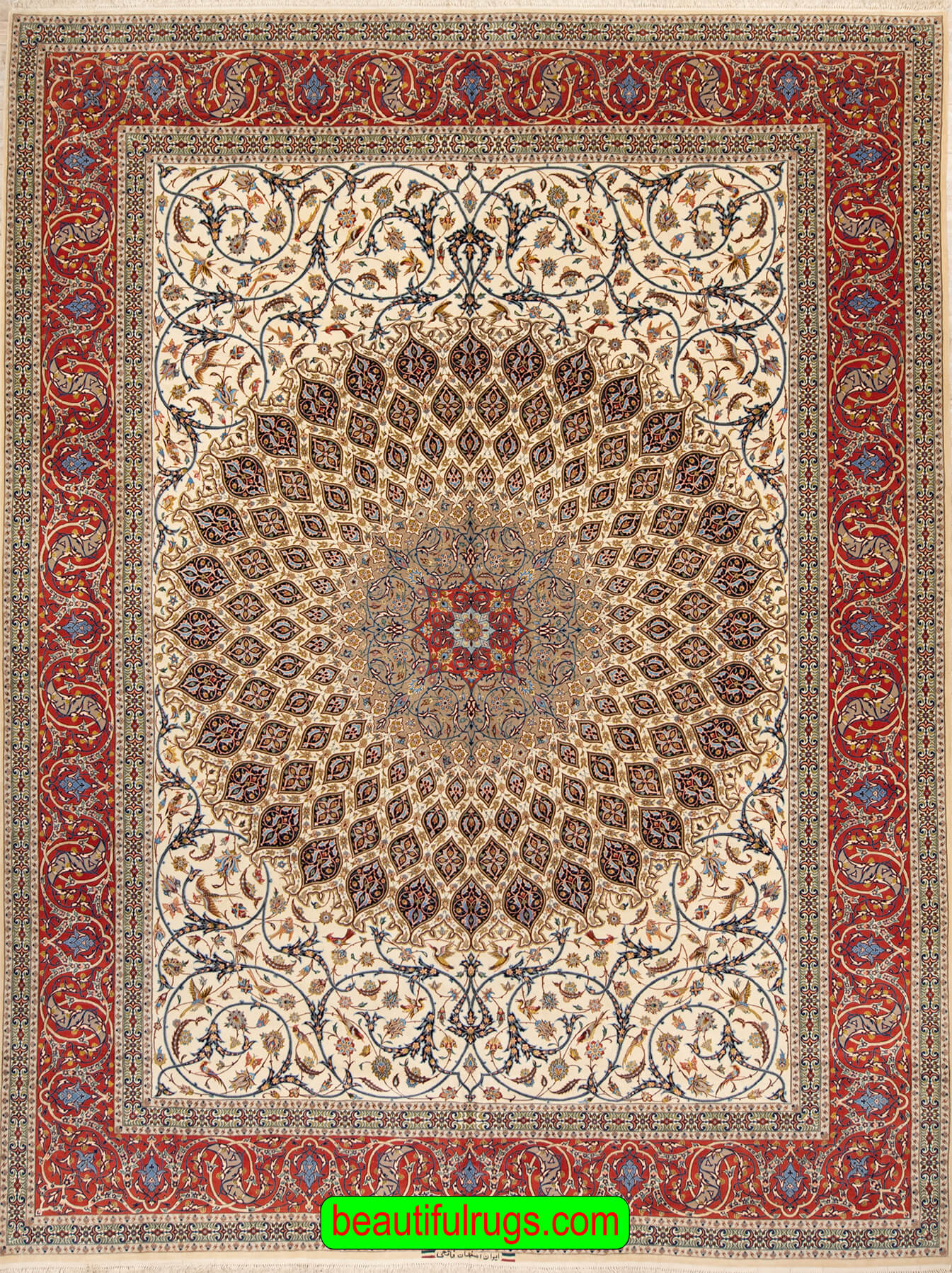 They were designed to become a part of the inner décor of the many public buildings and mosques that were built at the initiative of Shah Abbas, or for export. Never before had such large handmade rugs with very intricate curvilinear patterns with high knot density ever been woven, but under Shah Abbas, skilled and professional rug weavers in state sponsored workshops were able to create Persian rugs that became renown throughout the world as a highly valued and treasured commodity that was a suitable gift of state for a palace. About 300 of these handmade Persian rugs made during the long reign of Shah Abbas have survived.

These Persian rugs were made with the finest available silk and wool at the time, and many can be viewed at museums. The so-called Salting rugs from this time still inspire and impress viewers with their brilliant, deep and rich colors. Gold and silver threads are woven into the profusion of fine, intricate curvilinear arabesque detail of these rugs with the main border that includes inscriptions. https://hali.com/choices/tehrans-treasure/

The term Safavid (or Sefavid) rugs refers to any rugs made during the reign of the Safavid dynasty from 1502 to 1722, and these rugs already in the time prior to the rule of Shah Abbas I reveal great rug weaving skill and knowledge on which succeeding Persian rug weavers could refine and build on. The period from 1500 to 1700 is also called the first golden age of Persian carpets. An Ardabil carpet which dates from approximately 1520 is one such example which is periodically displayed at the museum in which it is housed. https://collections.lacma.org/node/230372 An example of an Ardabil style rug is available at Beautiful Rugs (catalog number 210) that is based on the design of Safavid Ardabil rugs from the fifteenth century

The earliest known Persian rug that has been found dates to the seventh century CE, and it is called the Fustat carpet that features a stylized lion shown in profile. It was likely exported from Persia to Fustat, a town near present Cairo in Egypt. https://art.famsf.org/fustat-carpet-19864

In the past Persian handmade rugs have also of course been made in villages and by nomads, and this rug production continues in the present. Such rugs are called village and nomadic rugs (as well as tribal) and often rely on simpler geometric design elements which can readily be woven on a horizontal hand or small vertical loom and have a lower knot count. Such handmade Persian rugs possess a distinctive charm and appeal that many rug lovers and collectors seek out.

It was not until the late nineteenth and early twentieth century that Iran again assumed a leading role as a leader in handmade rug production and export with the state supporting and fostering handmade Persian rug production. This period has become known as the second golden age of Persian carpets: highly sought for and expensive, antique Persian rugs over 100 years originate from this period. Iran remains the world’s biggest exporter of rugs, and the largest, most labor intensive and expensive rugs have been woven in Iran in recent years.

An example of such a handmade magnificent Persian rug available at Beautiful Rugs (catalog number 444) at top of this blog entry. This rug designed by the Isfahan master weaver Fatehi measures thirteen and-a-half by ten feet with its complex curvilinear Gonbadi design with arabesques filling in the remaining field and main border offer a stunning example of a handmade Persian rug that relies on traditional design elements.